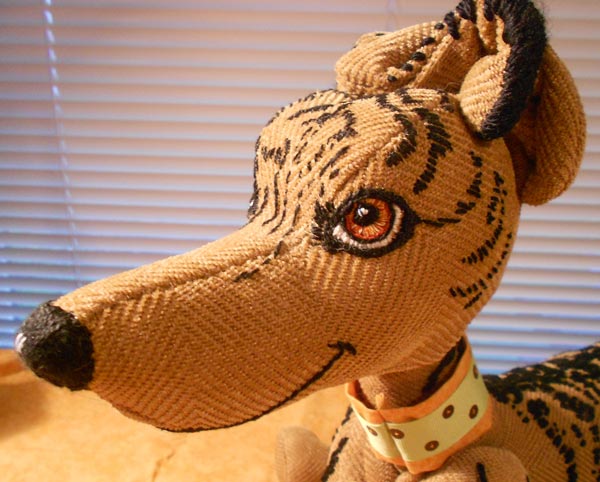 Back in April, I participated in an auction, committing to create a soft sculpture portrait for the highest bidder.  Marcy won on May 1st, and she chose Jack, her brindle greyhound, to be the subject of our portrait.

But first, what am I doing??

Jack’s portrait started before the auction even began, as I dove into researching techniques for creating soft sculptures and art dolls.  It got to the point I was dreaming about piecing and jointing!  When it finally came time to start, I had worked out that I wanted to do a jointed sculpture, rather than one in a set pose.  That was a pretty ambitious way to start my learning curve (oh, did I neglect to say, this is the first critter I’ve attempted to sew in about 30 years, at which time I was winging it, as well?), but I got really fixated on the idea of a jointed dog early on.  I had lots of other stuff to pin down (as it were) after that though.
How many joints?  What kind of joints?  Button-joints?  Bead joints?  Hidden button or bead joints?  (None of which I’d heard of before!)
What kind of material should I use to represent this fawn brindle greyhound?  Should I try to find something already stripy?  Embroider the stripes on plain fawn-colored fabric?  Paint them?
What about eyes?  Button eyes?  Painted eyes?  Needle-sculpted eyes?  Embroidered?
Should my sculpture have an armature, or be able to stand or flop about on his own?
How realistic did I want to get?  Trusty pencil, let’s see what we come up with.

Okay, that’s pretty realistic.  And it has lots of pieces.  I think.  But, I like how it looks so far.

Note that the feet look like they’re broken or something.  That’s to indicate they’ll be darted to make them bend the right way.  (It’s complicated!)
Now to see how many pieces are actually in that concept drawing.
Uh.  Okay, I see I have NO idea how to translate the curvy gussets (the inserted pieces that give width, among other magical powers) to flat pieces of fabric.  That took … well, it took a long time, alright?  I also had no idea just how deep or wide to make my darts (that’s essentially where you remove fabric, which can create either roundness or remove roundness – obviously, also magical).
I thought I might try my hand at a 3d sketch, to get more of a handle on the shapeliness, and think about joints.
What I worked out here was: no joint for the head, button joints for the shoulders, hips and knees, and gusset joints (ball? hidden button?) for the elbow and hock.
After a trip to the fabric store, the hardware store, and hours poring over books and websites, I settled on the heavy velour-ish herringbone-ish fabric of our bedroom curtains (re-use!), with a plan to embroider the stripes with black yarn (and possibly embroidery thread, on the face).  I was thrilled to obtain a bag of hand-made ceramic buttons, which I thought would give real character to the joints (but which turned out to be hole-less, and un-useable, which is why they were on the “seconds” table!)  I had also bought some blanks to make fabric-covered buttons, so I had a back-up plan.

I will now fast forward through the following months of trial and error, in this pictorial review.

Okay, there was nothing salvageable from that first attempt, or the other sets of ears, eyes, tail and heads I haven’t bothered to show you.  Time to start over, using what I’d learned.  I took a much more simplified approach, starting from this sketch:
Turns out, the head looked like a tiny torpedo, and the ears were too small, so those joined the reject pile as well, bringing us to this head, which finally worked.

I might still make some tweaks on that, if I ever did this again, but this worked quite well.  The colored lines mark where each piece has to align with the others.  Pinning and hand-sewing them all was a lot like doing surgery on a porcupine.  People like me should not be allowed around sharp objects.  That’s where the blood comes in.

I will spare you all the pictures of how I got it all done, and just show you my final products, eh?
Last but not least, I’ll leave you with his gentle, mischievous smile, so you can get another look at those eyes.  They’re embroidered in several colors of embroidery floss.  I actually mixed threads (un-winding individual threads from the floss) to get the mixing in his irises.

Some of you may recall that I was in the midst of a portrait of a puppy and her human dad.  That is getting put back into top priority.  Also on the board is a holiday card design for a corporate client (our third together, and I’m really pleased with our concept!), wrapping up a logo for another real estate agent, and … I’d like to do a portrait marathon before the holidays!
Stay tuned!

One thought on “Soft Sculpture: Jack!”