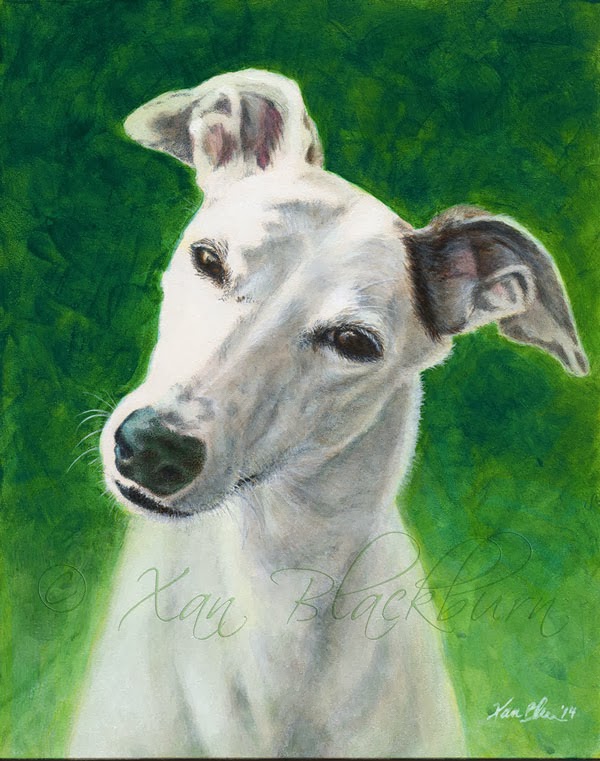 The differences between this and the previous stage may seem small, but they are the difference between not-done and done.  Or thinking I’m done.  I thought I was done last night, but apparently, that was not the case, as I saw some things I wanted to work on some more after I had started this post!
I’m always disappointed with how well these translucent layers show up here.  🙁  The subtleties in the layers of colors is flattened and dulled, no matter how I try to approach reality in Photoshop.  In this case, especially in the background, which is jewel-like in person.  Still, you will get the general idea.  I hope Gayle and Steve enjoy the original, when it gets to them.  Working on this was terrifying in a whole new way because they are both artists, and Steve actually did the original photograph, which was gorgeous just as it was.
Okay, so NOW I’m done.  I hope.  Here’s how that went, in review:

Rescue: My other job

I’m maybe not the best at dividing my time between rescue-related work and actual money-making work, considering that we are not independently wealthy.  I believe my hard-working (but always supportive!) husband concurs.
Meanwhile, what I do in “my other job” is also often artwork.

Team Inch is a collection of volunteers that have been working together in various arrangements over the last several years to rescue dogs in S. Korea.  As part of my contribution, I’ve developed the website, logo, Facebook pages and fundraisers (Virtual Bake Sale, Total Fantasy Dog Accessories Shoppe {with the help of a classroom full of kids doing illustrations}, and New Years Resolution Special Dispensations).   I also gotten to give a few dogs rides, and even got to foster one for a whole 5 days we’re not likely to forget (although the bruises are finally gone  😉 ).

We’re having another fundraiser in March, and I would be remiss if I didn’t invite you all for your shot at the goods.  This one will be an online auction, and I swear all the stuff is real this time.  If you’d like to donate any items, let me know, and I’ll get you all squared away.  Everyone else, mark your calendars!

And some other rescue-art things

Another aspect of my rescue-art work is donating to various other groups’ fundraisers.  I donated a small portrait recently, which was won by a very nice lady, and will let you know how that goes once we get started.  I’m also going to be donating a piece to a new Special Art Auction at an event called Greyhounds in Gettysburg.  I’ve been bemoaning (privately – poor husband!) about my lack of opportunity to play around and experiment with my art, so I can continue to grow and explore new techniques.  It occurred to me in a classic light-bulb moment that donations offer that opportunity.  So, I’m going to try out an idea I have been incubating, and I’ll show you that as it develops as well.  I still have no idea what I’ll be donating to our own Team Inch auction!
See what I mean about balancing non-paid work and paid work?  *sigh*