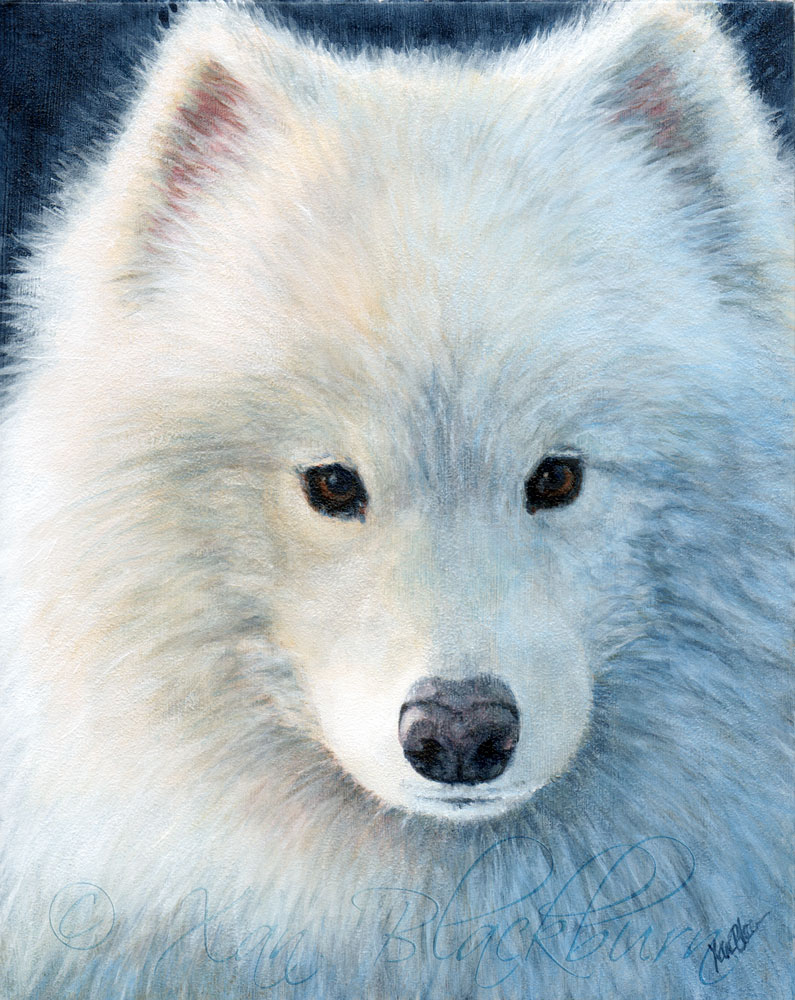 Samoyeds, I have been reading, are really cool dogs.  Friendly, happy, gorgeous, and not particularly hard to keep groomed, despite all that hair.  Sasha was the much-loved companion of Robin’s parents, and really, who could resist a dog that is the perfect mix of snow white teddy bear and noble white wolf?

It took me several days to figure out how to approach Sasha’s all-whiteness in an interesting way.  It came to me on the way back from the post office to mail off the first 7 paintings in the Marathon.  When I finally started to paint, I got distracted by something, and did the exact opposite of what I meant to do.  *sigh*  I was halfway into the underpainting before I realized I’d reversed my plan to have the shadow side underpainting done in a warm raw umber, and the lighter side underpainting in a cool blue-gray.  I had tried sketching it in ArtRage to make sure it would work, and liked the effect.  Oh well.  Maybe next time.  Once I realized, I just carried on, mixing the warms and cools across, in hopes that I was building up not-mud, hoping that the final white glazes would pull it together.  Here’s how that went. 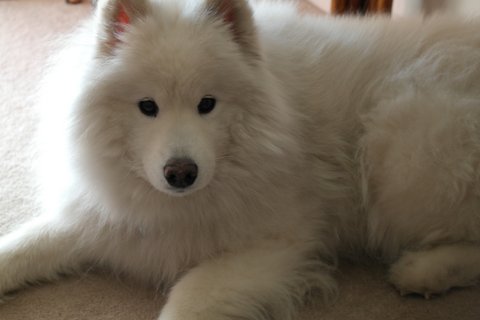 This is the original reference image.  Since I’ll only be using the head, the section I’ll be using, at highest resolution, is about an inch wide.  And the tips of the ears are cut off. So, Google helped me out with lots of Sammy pictures, to make sure I got things like eye color, nose color and ear-tip shape right, as well as fur color (blue-white? creamy-white?)

As I said, I dove right in with the dark blue-gray for my underpainting, working on the general flow and shape of the fur, and the shapes of the nose and eyes.  The fur is a mix of soft clumps, both long and short, velvety areas on the face, and whispier hair coat.  Where those zones and growth directions run into each other create ridges and broken textures that are really key in communicating the structure of the fur, its feel, even if I never paint a specific hair.  You can see also that I had the idea that I’d keep Sasha just off-center, as if she was just moving into or out of the picture, with a bit of background color along the left margin.  I ditched that idea towards the end. 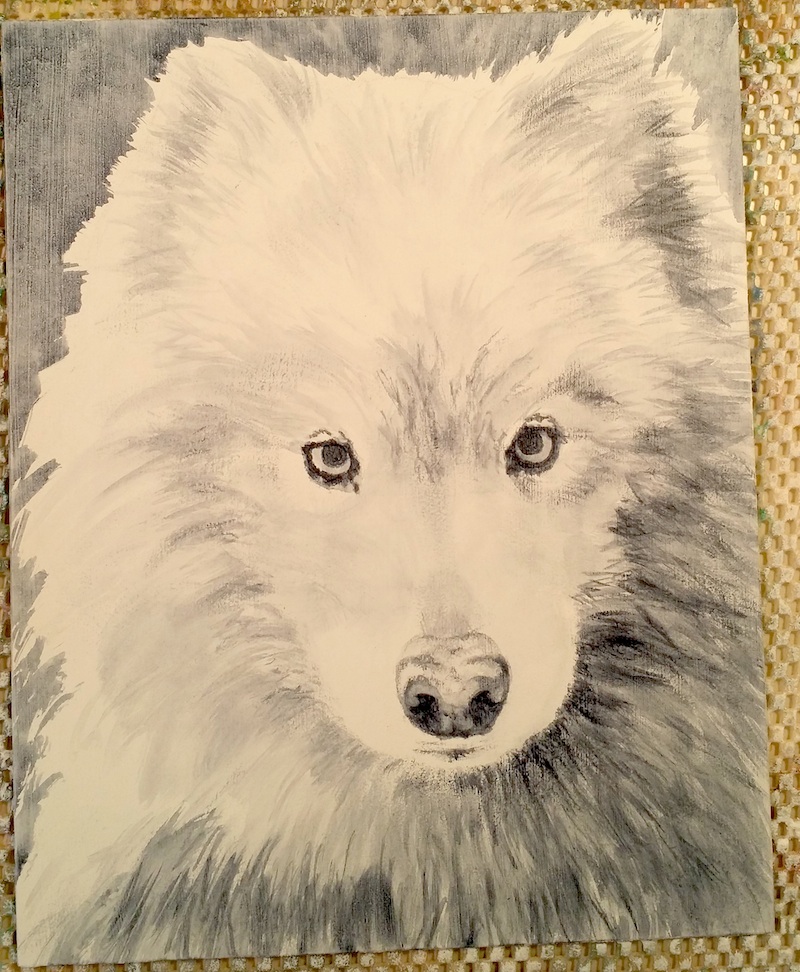 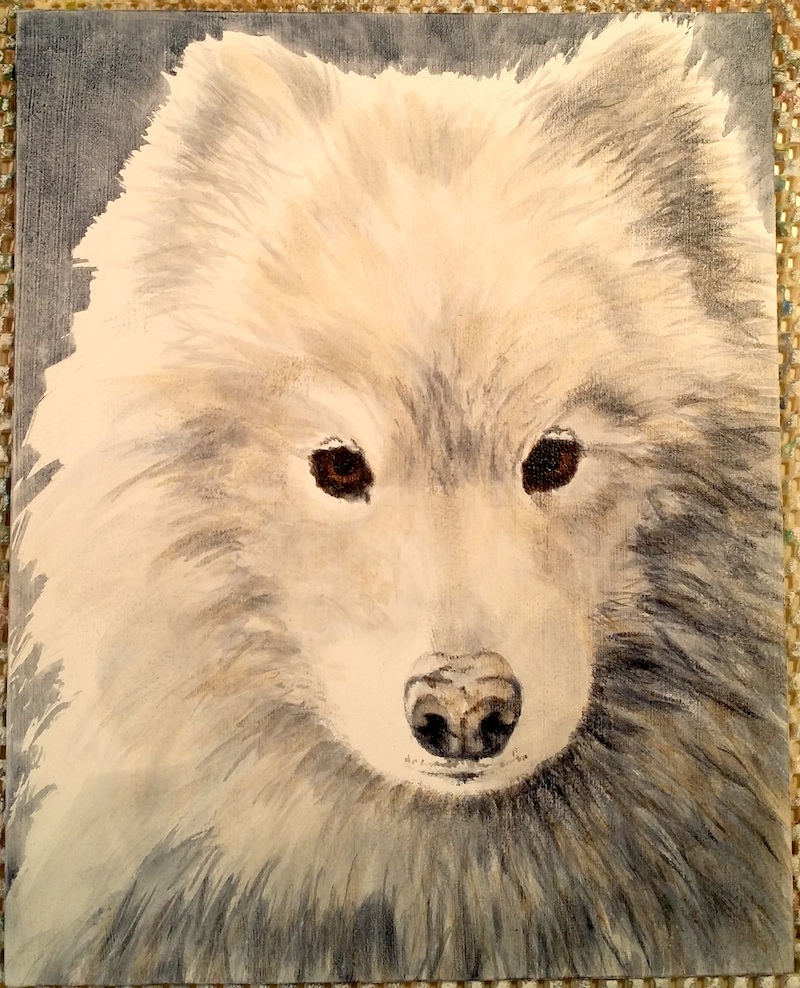 With the blue-gray shading pretty much in place, I started working in the warmer tones, with raw umber and just a touch of vermillion in the nose and eyes.  The eyes are so dark that the color is almost impossible to discover, and Robin couldn’t recall a specific color, so I opted to just keep them dark, and more warm than cool.

Some of that vermillion went into the ears, warmer on the light side, with the sense of light coming through it, and cooler on the shady side, as the pink is mostly in shadow. Continuing to develop the colors and shadows, and trying to avoid making a muddy mess.  Not too confident at this point, but all my paintings seem to go through what I call an ugly phase that I used to despair about, but now understand that I can almost always move past.  Almost always. 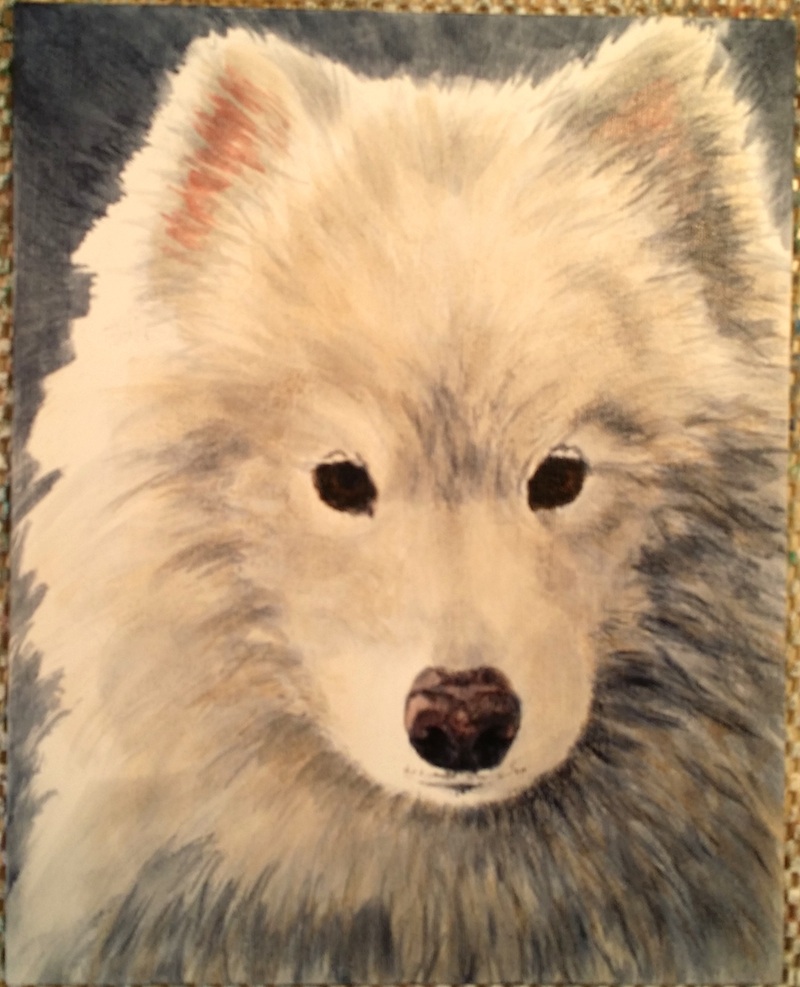 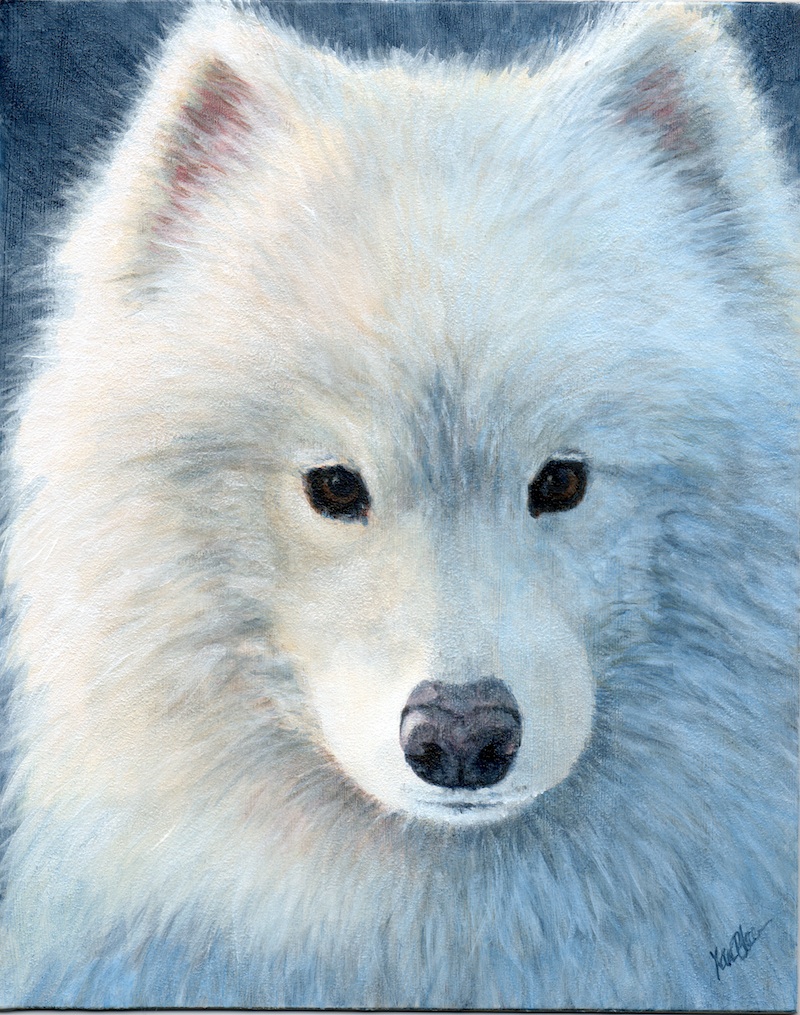 Finally, to add the highlights!  Mixing up some glazes of a pale periwinkle and white, I washed over the entire right and lower area, softening all that choppy, muddy fur shading, and cooling that area down considerably.  On the lighter left side, I glazed in white and buff titanium, which is a pale tan you can see in the underpainting as well.  Working back and forth with sweeping glazes and detailed highlights, I softened, recovered some details, picked out some textures, and generally got closer to done. This is where I got it by dinner time last night.  I thought I might be done, but a few things were still not quite settled.  Right before bed, I came and looked at it, and made some notes for things to work on in the morning.

I decided to finally scrap the blue background along the left margin, as it squared her off in a way I just couldn’t like.  Filling that area out with a soft halo of white made a great difference.  I also softened the shading between her eyes, which had gotten too dark, broadened the shadow in the middle area of the bridge of her nose, shaved a bit off the right side of her muzzle, toned down some excessive highlights around the eyes, and rounded out the shadow zone along the left side near her eye and upper jaw.  I also decided to go darker with the background, which I’d been avoiding to keep the highest contrast inside her face.  Darkening the background seems to have pulled her into better focus though, so I’m happy with that change.  Another bit of tweaking to pull it all back together after the changes, and ta daaa.  Done.  The finished painting is at the top.

Okay, so who’s next on this Marathon?  Looks like Jenn’s red and white greyhound boy, Cole!  Off we go, then!

4 thoughts on “Sasha the Samoyed; #8 in the Portrait Marathon”