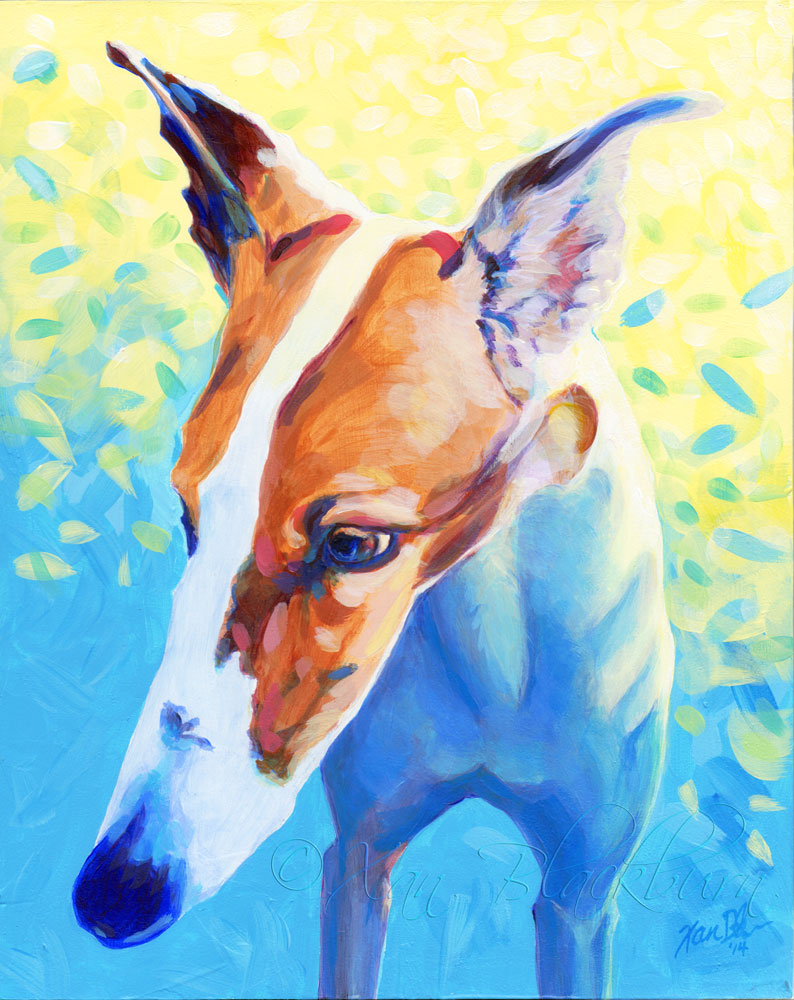 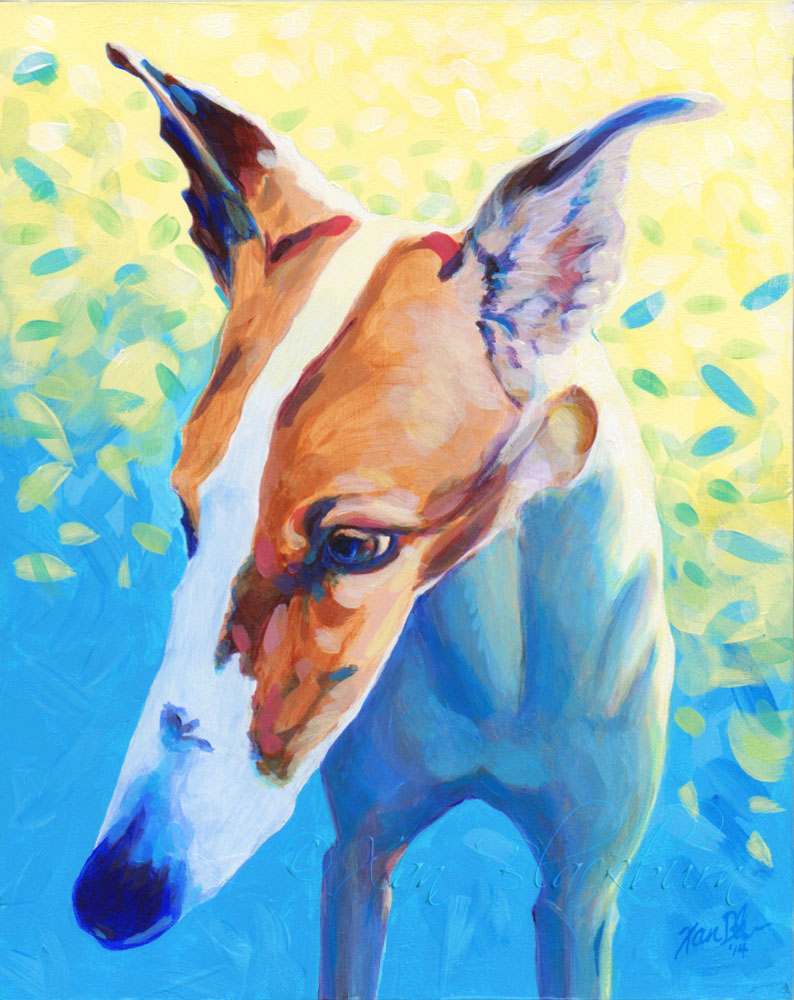 END_OF_DOCUMENT_TOKEN_TO_BE_REPLACED

My series of paintings of Ellen’s dogs continues with handsome Bud.  I loved his gentle, relaxed smile, his soft hair and wonderful markings, but who could resist those bluuuuuuue eyes!

Working on paintings in a digital way allows a lot of freedom to experiment without committing irreversible damage to a painting.  That’s hard to resist, and I had a lot of fun trying out backgrounds, experimenting with various brush techniques for the fur, and zoooooming in waaaaay too close to get tiny details that no one else will ever be able to see.  That’s the potential down-side!  I had to keep stepping back out and lecturing myself about not re-creating reality, but enjoying a more painterly approach in this small format.

Here’s a quick step-through of the painting’s progress:

I kind of like that second step, too, where it’s the sketch with the first whacks of color laid in.

As I have mentioned, my OTHER job is all about rescue and animal welfare work.

Team Inch:  Right now, Team Inch is having our first online Auction, and I invite you all to be part of helping us rescue and find forever homes for sighthounds by bidding on some really pretty fabulous items.

Team Inch coalesced last fall, out of a nebula of folks already rescuing dogs from S. Korea.  In just a few months, we’ve been through so much, bringing over 8 sighthounds, partnering with established adoption groups in N. America to find adoptive homes for them, establishing a Facebook and static website presence, and having some heart-breaking losses.  The risks and veterinary costs for these dogs is comparable to some of the worst-case scenarios we see anywhere in the world, and transporting these mostly larger dogs to N. America where they have a better chance at life is expensive.  But many hands make light work, and in this way YOU can be part of Team Inch.  See you over there!

I’m also doing a top-secret fundraiser for this group which I can barely keep to myself.  Believe me, you’ll know about it as soon as I can tell you!  Great bunch of hard-working volunteers.  Maybe you can be part of the network!

Nittany Greyhounds runs this very popular event for greyhound families every year.  While I can’t go in person, I will be sending a painting to their Special Art Auction – a first this year, I’m told.  This painting is very personal to me, and I’m proud to be able to send it out into the world for this.
This painting is a more experimental piece for me, using various media (paper, acrylic, graphite, pastel on Claybord panel) in one piece.  I love the layered depth, the complex feel, the moody emotional possibilities that arose from both my own emotions and the materials working together.  I’m going to title this one “Memories”.

Here’s a detail, so you can get a little better idea of the complexity:

Now it’s on to Ellen’s Moma. 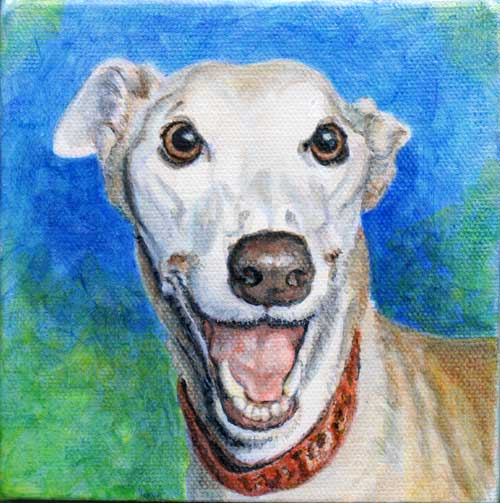 While I wait for it to dry enough to scan, I’ll show you this intermediate version.  Some of the “magic” white glazing has gone in, and is particularly visible on the tongue here.  The background has gotten several layers, including a worrisome yellow around the edges.  Dear reader, hang on.  All is not lost, but only scaring you so that you’ll appreciate the final trick that much more.
Okay, it’s dry enough to scan.  Let’s take a look and compare.  I’m not feeling too wordy today (for a change!), so I’ll just give you the visuals.
That’s better, right?
Now, on to the very last portrait for the FALL Portrait Marathon: Cara Lea’s kitty, Cosmo!
A fitting end to the marathon, since it has been a fundraiser for the feral cat rescue organization, Creatures Comfort of Bellingham, WA! 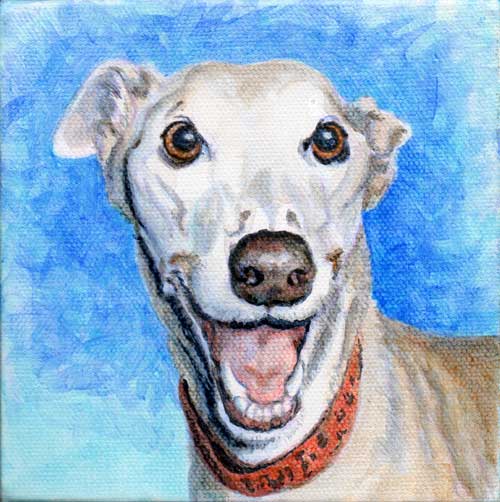 
Sammi’s portrait is zipping along now.  Even though he’s such a subtle guy (except for his exuberant personality, of course!), some truly deep darks are necessary to make his light face have dimension, to POP it out of the background.  So, in I go, with my Payne’s gray and my raw umber and my ultramarine blue, punching and pushing bits forward and backward.  I was telling H the other day that when I’m really in the Zone, it feels as if I’m actually sculpting something plastic, like clay, smooshing and poking, pulling up and smoothing actual three-dimensional substance, rather than dabbing or stroking over a flat surface.  It’s cool.  Almost hallucinogenic or dream-like.  Sometimes, as when you wake from a dream, the effect isn’t quite as I’d imagined it, but it’s still a fun state to be in, and does result in a better painting or drawing.

Next, I’ll be laying in more yellow-browns, some more background colors, and then the white to tie it all together, and make that bit of magic happen. 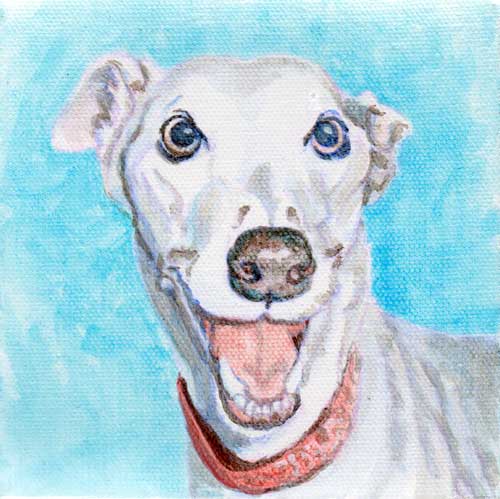 Sammi was a happy guy!

According to his human, Sammi came to them as an 11.5 year old bounce, wobbly and with a “slight fecal incontinence”.  He was a sweet ol’ guy, but had no problem telling his humans he was in want of something by barking until they figured out what it was!

The pic I sent was him 10 minutes after he walked in the door. It is still the way I remember him.
He slipped in and out of our lives so peacefully, how can I miss him so much ? 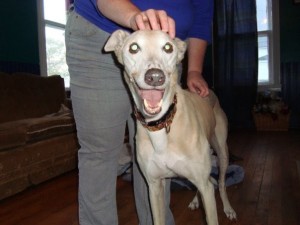 The photo is adorable!  How could you resist that smiling face??  Unfortunately for my purposes, it’s also both low-resolution, and burnt out by flash.

Even after doing what I could in Photoshop, this is what I have to work with (below).  A bit vague-ish. His other ear is a softly blended blob.  But, what can you do?  Luckily, most greyhounds have pretty similar physiology, and I have a couple laying around for reference.

I thought I’d move him out into a sunny day background, and remove the fingers crawling on his head and hips.  I did my drawing to the best of my ability, and transferred it onto my canvas using a pale periwinkle pastel this time. 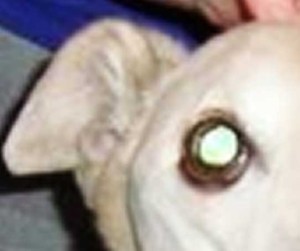 Addressing the pallet, I saw I still had some useable paint.  Waste not, want not!  I used some white with glazing medium to set the drawing, for starters.  I diluted some ultramarine in the same way, and started washing in some pale shading, working up to the darker areas.  It’s not super dark, particularly as I had to get it pretty wet to revive it, but it was good enough for a first round.  I also had some raw umber (dark mud-brown), so I started in with that, using it to bump the darks up too.  I love the way the cool blue and the warm brown play off of each other! 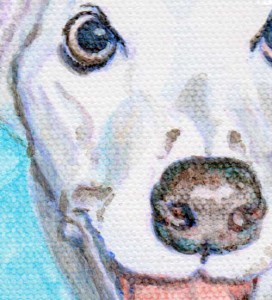 I also had some red, so I decided to lay in the base tones in the mouth, nose and collar, even giving the eyes and ears just a hint of pink.  Sammi’s nose has quite a bit of pink, as his color is so dilute, so it’s an interestingly mottled pink-dark brownish gray*.  I like how it’s coming along at this point.

I still had some cyan (sort of a sky blue) that was useable, which fit my concept for the background, so in it went.  Once I had some of that down, it also made its way into some reflections on the more shadowed side of Sammi, and on his nose.

I know he looks a little evil at the moment, but the lines over the inside corners of his eyes will be softened in the final round.

So, that’s where we are at this moment.  Back to work!

_______________
*I used to work in a comic book coloring studio with some very talented artists.  The owner of the studio used to describe colors like this, which always cracked me up.  “It’s a sort of pinkish, greenish, purplish orange with a hint of blue.”  Oh!  Well, that clears that up!  😉 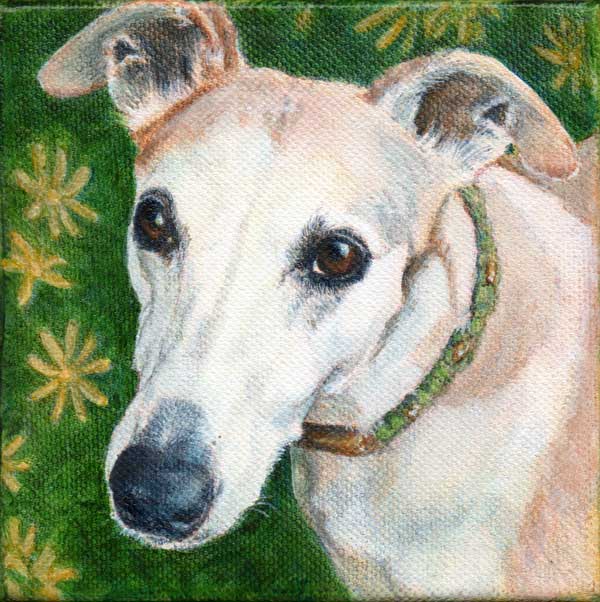 
Matt’s painting finished up in one sustained burst, and I didn’t get any more progress pics for you.  Sorry about that! 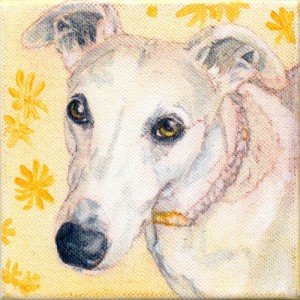 We left off here.  One of the first things I did when I picked my brushes back up was to start laying in the dark green background, so I could get a good fix on my values (darks and lights) on Matt himself.  I worked in various layers of Hooker’s green, thalo blue and Payne’s gray over the initial pale yellow-gold.  Some of it I washed over the daisies as they needed to be part of the background, and recede in areas, instead of looking like they were printed on top.  But they got a little too subdued, so I brought them back into the sunshine with a few dabs of yellow, white and raw sienna.  They’re actually a little brighter in real life.
Once I was relatively comfortable with the background, I went back in and had more fun with Matt, enhancing the underpainting some, and then glazing in the color.  Then it’s all about details!  Clarifying the eye details, the fine hairs around the nose and eyes, the complicated ears, with all their different hair movement, picking out the beads in the collar, defining the edges of the ears, and the tiny hairs around the muzzle.  Once the color was in, it needed to be toned down, as Matt’s color is very subtle.  Glazing in with white, tinted this way and that, brought a much more realistic feel to his coat.  The water-colory early stages I like a lot, but they are more flat, simpler, lacking in depth.  The more glazing I do, the more it begins to have a feel of a real animal, with real fur, and real liquid eyes and leathery nose.
My husband thinks Matt’s expression is very like our own greyhound, Brilly’s.  I have to agree, and once again, it will be hard to part with this little painting!  But, as interrupted as this marathon has been, it’s definitely time to move on!  So, he’ll be in the mail this weekend.
Next up is my own dear friend Merann’s sphinx kitty Emmet!  He’s a cute little guy!  Just wait ’til you see him! 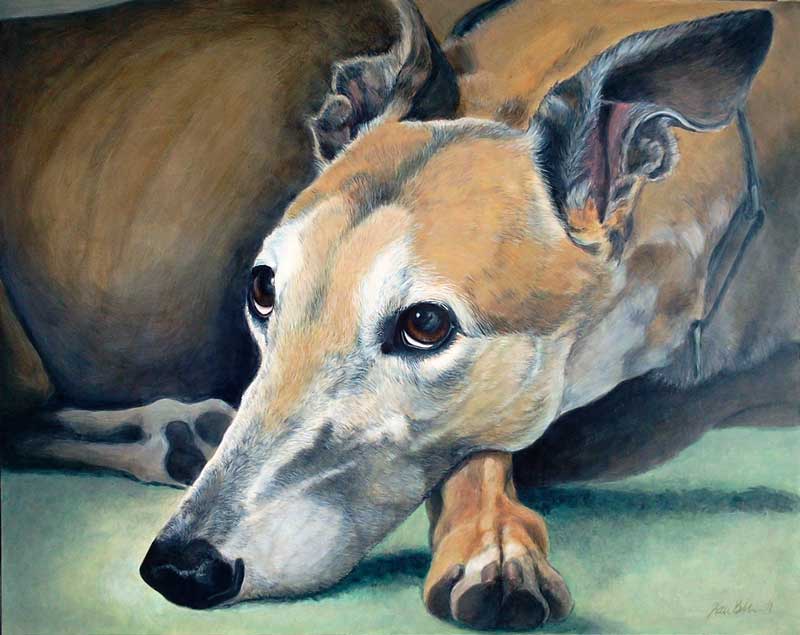 I realized today that I never did give you the whole picture of this portrait from last November.  I gave lots of teasers over several posts because it was meant to be a surprise present, so I couldn’t give it away.

Well, the present was given and received, so I’m free to share it with you now.

Bunny has a look much like my boy Brilly, so falling into those big brown eyes was easy and familiar.

It was a fun challenge to paint this large.
I finished Bunny right before I started my epic “Fall Portrait Marathon”, which I’m still working on.  More on handsome Matt later!
Stay tuned!