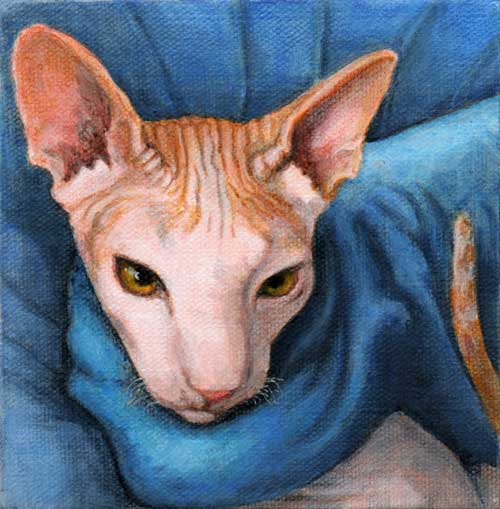 Well, I almost never totally leave a painting alone even after I’ve told you it’s done, but we’re at that stage with Emmet now.  I’ve grown very fond of his little wrinkled brow and arrow-shaped face, but we’ll be saying farewell soon.
…
Case in point: I just repainted the entire background between the last sentence and this one!  Typical!

Anyhow, when last we saw Emmet, he was sporting this look.
The color was basically in, still kind of washy, a little coarse.  The magic transformation always happens almost paradoxically by glazing whites over all.  You wouldn’t think that would help to make things seem more three dimensional, but somehow it does.  In the real world, light bounces all over the place, including deep into more translucent objects, like skin or eyes, and also off the surface of those objects.  It seems like the last glazes of white give it that surface light, while still allowing the sense of things below the surface to be seen as well.

Take a look at these side-by-side details to see more of what I mean.

Doesn’t it look more like flesh, more dimensional on the right, after the whites have been applied?

Well, that’s about it for Emmet’s portrait.

Who’s up next?  Let’s see ….
Ah, yes!  Robin’s kitty, Allen!  Allen is a tabby, with fur and all, so that will be a different kind of challenge altogether! 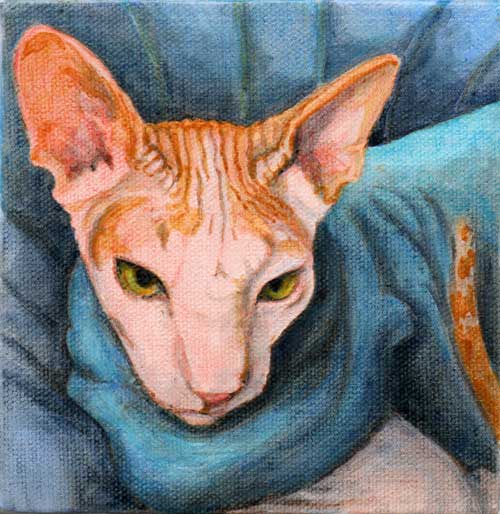 
Emmet is really coming along nicely.

He got another wash of diluted red, which doesn’t look so weird now, but seemed very sun-burn-ish when I first looked at it.  Lots of layering of shading and color has gone on.  See the difference?
I’m still not thrilled with the modeling on the sweater, but it still has time to come together.  I do like how the color is building up dimension on his face.  I’m headed towards glazing in some white, which will pull it together in an amazing way.
I’m calling it a day for now, but I wanted to share with you what Merann has to say about Emmet, after looking at the first two installments.  (She has several nicknames for him, including PoPo.)

What to say about PoPo – he has quality of life with his meds.  Never could you meet a sweeter cat who for 7 years endured such pain – that he could barely walk.  He KNOWS when I sit down – how – I don’t know.  but when I do – here comes his nekkid butt running and I mean RUNNING down the stairs and leaps in my lap.  He then proceeds to head butt me – and smear my lipstick and knock my earrings out of my ears.  My little Mo.  This tiny little baby curls up in my arms at night – takes one of those poor injured paws and pats me on the cheek.  (OH great now I’m gonna cry). He drifts off to sleep and has little kitty dreams where he twitches and I sincerely hope – runs without pain.  He is my dear darling PoPoLITO – my little purrito.  He is 10 years old and I hope he is with me for a very very long time.
We won’t talk about the peeing on the bathroom carpets. hhahahahhahahaa

He’s a special little guy.  The peachy feel to his naked skin makes you feel very protective of him, and his tiny toes, deformed without their final claw and joint, are incredibly touching.  Merann totally saved this little guy’s life. 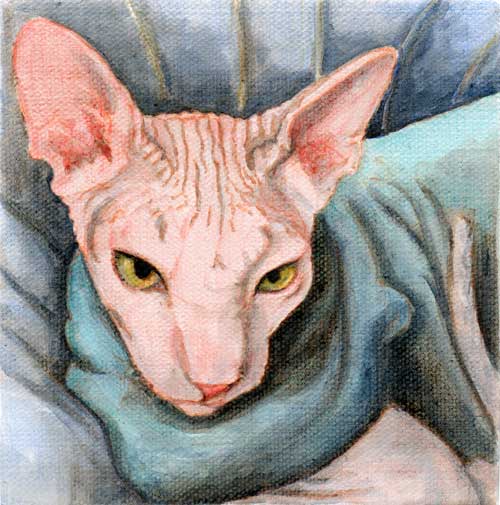 Little Emmet still seems to be scowling, but that will be resolved right at the end.  In looking at the painting this morning, it was clear to me that the underpainting was really not done.  The darks were nowhere near dark enough: my usual timidity!  That pop that gives the final sense of reality is really in the contrasts of darkest darks and highest highlights, so you can’t really be wimpy about that.

Still, I was excited to start laying in some color, so I cheated and did the first color glazes first.  I’m not recommending that, just sayin’.

I’d been thinking about how I would achieve that glowing translucence of skin with barely any pigment in it.  I decided I’d start with the way it is in reality: from the blood out.  I diluted a cadmium red hue, and washed it over all Emmet’s exposed areas.  It looked VERY pink, but I know it’s going to have lots of layers of “skin” on top, so I didn’t worry about it.

While waiting for that pink to dry, I got out a couple blues to start on the non-Emmet areas.  I chose a cyan blue to start on his sweater, and ultramarine for the cushions around him.  The ultramarine is a blue-violet, which is cooler than the cyan, so they won’t just become one big blueness with a cat head peeking out.

Once I had indulged my need for color, which really did help to define what was what, and give Emmet some life, I dutifully got out my old faithful Payne’s gray to develop the shading more.  I started right in Emmet’s eyes, deepening the pupils, the upper lid, and the watery shadow that casts right into the eye itself.  I spent quite some time washing in shadows on his sweater and the cushions, and pushing his elbow and tail back into the shadows a bit.  Even though the reference photo was lit more generally, I want the focus – the spotlight if you will – to be on his distinctive little face, so I’m moving the light source over to our left and up a bit, which will give me more interesting shadows to give him dimension.

I also brought that cool Payne’s gray into Emmet’s face, giving him some more subtle shape, with the shadow cast by his nose and the curve of his muzzle, and his eyebrow area on our right.  I also got that dilute red working again around his face, bringing more depth to the pinks around his nose and mouth, his eyes, and particularly his ears.  I think that’s going well.

Merann told me that Emmet’s eyes are golden-greenish-golden, depending on the light.  Okay!  I mixed a light golden yellow with the glazing medium, and gave him that first glaze of gold to back up and light up his eyes.  When that was dry, I went back with a little of that cyan in his sweater, mixed with a touch of the yellow glazing medium to add some areas of that green, preserving areas where the light would be likely to pool from my chosen light source. 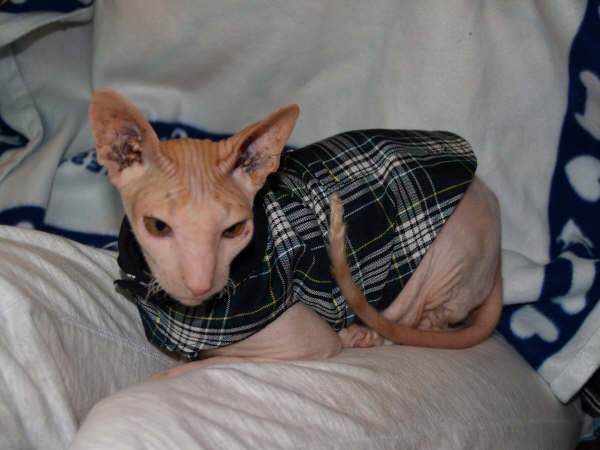 My dear friend Merann is a woman who looo-oooves her pets!  She has 3 greyhounds as well as a bunch (how many is it now?) of cats.  Her Cornish Rex, Emmet, is a special guy.  He had his claws removed in a previous home, and suffered great pain until Merann got him sorted out.  He has no fur to speak of, which reveals what most cats hide under their thick fur.  He’s a study in smooth elastic skin and wrinkles, the gathers that allow him to have such expression and to move with the fluid grace of the feline kind (I’m laughing here – any other cat people rolling their eyes and thinking of their klutzy cats upending potted plants or knocking over the knick-knacks during some pell-mell race through the house?) 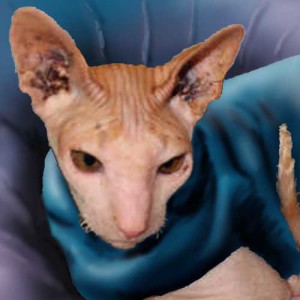 Anyhow, Emmet.  The photo Merann chose is not so great for my purposes: low-resolution and a bit dark.  It’s hard to tell what color his eyes are, even zoomed in.  I did what I could in Photoshop, and played with the background, also removing the plaid, as I thought it competed too much with Emmet’s subtlety and his own delicate patterning.  Here’s what I’m using for a reference.  Don’t worry about how crude it looks.  It’s just for my own purposes.  I also have asked Merann to tell me the eye color.

I thought I’d throw in some wrinkles or patterning in the background behind his head to sort of echo the wrinkles on his forehead.  I’ll keep them subtle.  I’m also going to give him a bit of a makeover to clean up his ears.  (Merann says that condition has cleared up, so yeay!)

I transferred my drawing to my canvas, this time using a pale gold pastel so it wouldn’t be too dominant even under the paint.  For my underpainting, this time I mixed some warm burnt umber with my usual cool Payne’s gray, to warm it up.  I want to accentuate his pinkish skin, so like human skin.

He looks a bit punky or angry here, so I’ll have to tone down the wrinkles between his eyes.  I’d say the underpainting is pretty much done though.  Tomorrow, the rest of the story!