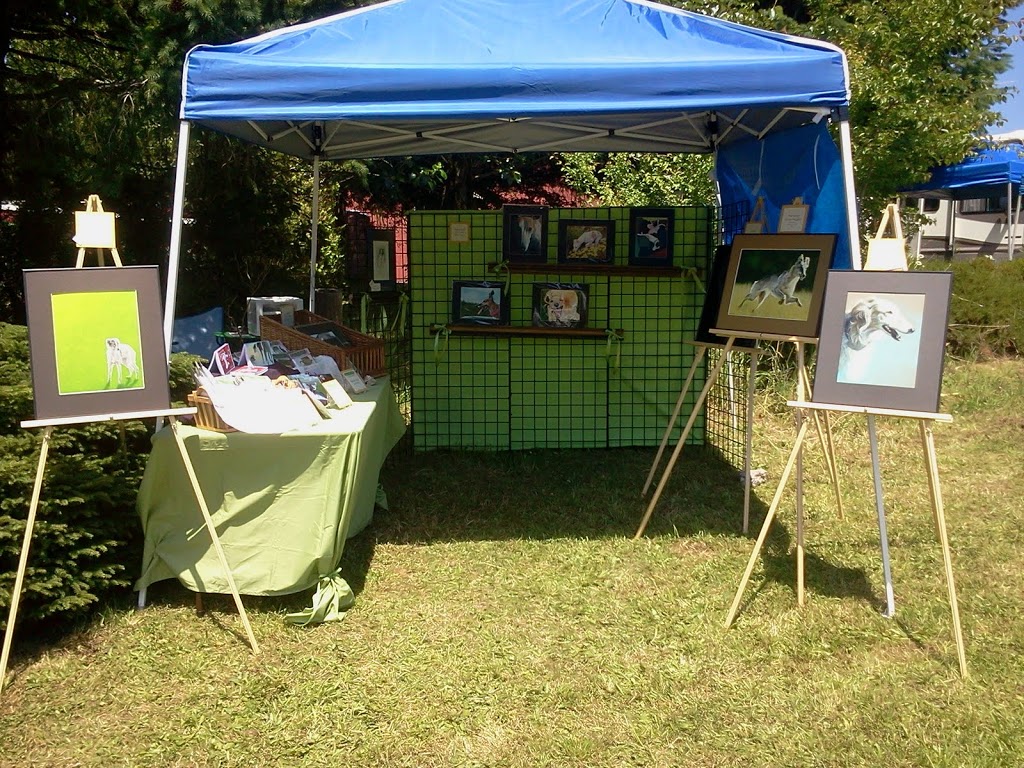 We managed to find a great young lady to petsit who I’m not going to tell you any more about in case you all swarm her with requests, and I can never get her again!  Suffice it to say, everyone loved her, and all was well.  The main point here is that I got H to come with me!  YEAY!  Everything goes better with the HusbandMan.

We packed up the car with all the display stuff, piled on top of an air mattress and bedding, and off we went.  We got down to Karen and Paul’s lovely home around 6-ish Saturday evening, greeted by friendly people, and whirling flocks of silken windhounds, adults and youngsters, all enjoying the warm evening and warm hospitality.  We pretty quickly felt like part of the on-going party, with puppies mugging us for pets, drinks offered, and conversation zipping comfortably along.  It was so nice to put some faces to people and dogs I’d met online, and to see my pal Linda again.

We figured we’d better settle on our spot to set up the display, and get the car/our bedroom parked in a relatively flat area out of the way, before it got dark.  We chose a spot that was nestled into the shade of trees, flanked by some lovely shrubs, unloaded the stuff off our bed, and eventually inflated it and crawled in on top.  Which was amusing.  But relatively comfortable, if a bit slantier than we had thought.  Which was also amusing.

The next day dawned sunny and warm, and just got more of both.  We got the booth set up, and wandered around trying to pitch in here and there, watching them get the lure set up for straight races to be held in the afternoon, and testing some youngsters on it.  A young girl, Grace, was there with her mom and ~5 month old puppy, and we hit it off.  We had fun sharing art stuff, and just generally goofing off.  In the afternoon, people started showing up after the NAKC shows wrapped up at a nearby park.  It was an afternoon of straight-racing, all silken windhounds, and I even got to help out at the starting line for a bit.  I never did figure out how the points and standings and winners worked!  Very arcane stuff!  H and I both did enjoy watching the dogs have a blast chasing the lure, or each other.  Or neither.  H got a bunch of pictures, but I can’t get them off his phone to where I can get them!  *grrr* 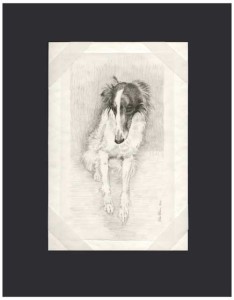 I got some great feedback, and nice chats with lots of people coming over to look at my art, many of whom had watched the development of the recent 3 paintings here on the blog.  The painting of Hunter got a lot of attention, but was already sold.  Bados’ owner, J, decided to take his portrait home, too.  (Bados was there, and in fine form, winning all sorts of things, and looking fabulous!)  The little drawing of Silkie that I completed right before we left was also sold before the event, but also got some nice attention.  I had a guest book for people to sign and give me some notes about things they’d like to see from me, which turned out to be a great idea.  Very useful!

I sold some cards and prints, but didn’t expect to move much of those, since they’re all greyhound related, so it was nice to see some go.

When evening fell, there was an enormous feed, an open bar, and all the flowing dogs and conversation to make the time race towards our bouncy airbed.

We slowly woke to the sound of rain on the roof around 3am, which at first seemed just cozy and pleasant … until the lightning started to register, and the fact that my artwork was not exactly rain-proofed started to sink in!  We jumped (okay, disentangled ourselves) from the car, and ran up to sort things out more securely, while lightning lashed the sky, and soft rain fell.  Once we got our damp selves back under the blankets, we were treated to more light-show, and some quite respectable thunder ’til we finally fell back to sleep.  Only to be awakened a little after 6 by a huge explosion of thunder, like another whole car had been dropped on top of ours, followed by a dump truck load of bowling balls.

We eventually gave up sleeping, and assembled ourselves for the day.  We had found a big natural foods market nearby, sharing a shopping center with a Peet’s Coffee, so we started there.  After fortification, we returned to what was meant to be a full day of all-breed lure coursing.  And hopefully selling some artwork.  Well, one out of two ain’t bad!  I don’t think I sold anything on Monday, but I did make some nice contacts, including a serious interest from the NAKC judge.  Maybe more on that in coming posts.  I felt I needed to take my more vulnerable work down because of the damp weather, so my booth got a lot more … efficient looking towards the end. 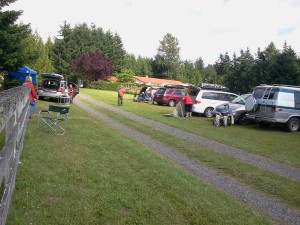 The weather was cooler after the rain, but cleared up nice and warm in the afternoon.  New people and dogs started to show up to join the fun.  Several strikingly fit whippets, two stately borzoi, and a group of solid and serious-looking Rhodesian Ridgebacks took turns in the various smaller paddocks to stretch their legs and await their turns.  The lure machine simply wasn’t cooperating, so there was a lot of waiting, and a lot of work by Paul and crew to try to sort it out.  Meanwhile, everyone (except Paul and crew!) just relaxed and shmoozed. 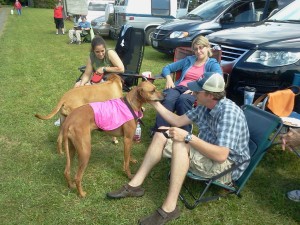 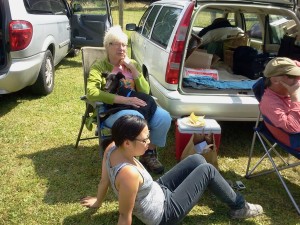 I didn’t take nearly enough pictures, and none of the lure coursing itself, but that’s no loss: they would have just turned out as little colored blots just dashing behind a tree or something.  It was fun to watch, though!  H enjoyed it so much, he’s talking about setting up a lure course here for our lot.  At least a straightaway.

All good things must come to an end, and so it was with NWFest.  H reminded me we had a pet sitter and pets to get back to.  Suddenly in a big rush,  we broke down the booth (what was left of it), mashed it all in the car, said our good-byes, and were down the road in record time.

The day after we got home, I learned about another event almost around the corner from us, which I promptly decided to vend at.  From my Events page:
SnipFest: Music Festival to benefit WeSnip: Saturday, August 6 · 10:00am – 10:00pm These good people provide low-cost and even free spay and neuter services, and help to capture, neuter and release feral cats.  This great benefit event will be a fun day of music and vendors, food, a beer garden, and a police dog demo.  I’ll be there!


I’m hoping to be able to finish two commissions I have in progress now, just to fluff up my display, before sending them off to their owners.  I’ll let you know how that goes over the next few days!