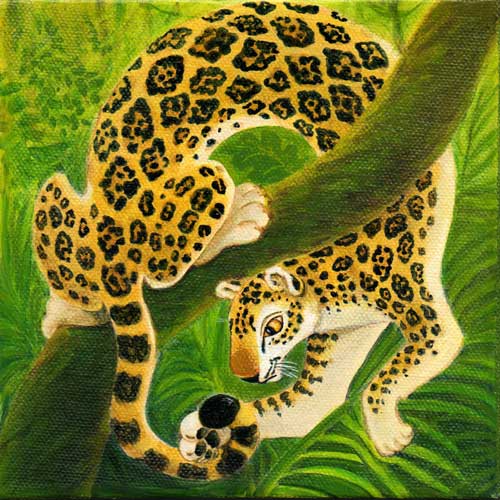 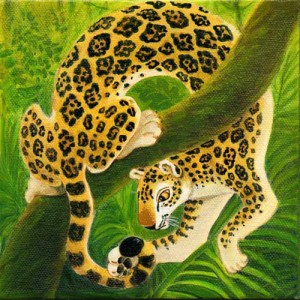 Some of you might be aware of the big holiday season of joy and gifting going on here in the states, and elsewhere, I’m told.  Yeah.  That one.  Well, what do artists without tons of ready cash do for gifts?  ART! If you happen to have grandkids (or grand nieces), it might be really fun!

This jaguar is for my grandson, Max, who’s room has a jungly theme.  My husband did an elephant.  Each on 6″ square canvasses.  Our styles are comPLETEly different, so they make an interesting pair.

I’m really pleased with how this turned out.  It was finished this afternoon, the merest minutes before having to be packed off to UPS.  In fact, we were in such a rush that I forgot to scan it, wrapped it up, H taped up the box, and had it in the car, and I had already jumped in the shower, when I started whining about how I really wanted it for scanning!  Good man, he went out and cut open the box, I jumped out half-showered, carefully un-wrapped it, scanned it, re-wrapped it, and jumped back in the shower while H re-taped up the box.  It was worth it.  I greedily want to keep at least the image for myself!

I didn’t take time to do progress pics on this, but I can go through it quickly for anyone that might be interested.  After finally settling on a sketch (that took about 3 weeks, and went through a frenzy of different takes yesterday before becoming this shape late in the afternoon), I transferred the drawing to the canvas (which I sanded smoother first; I like a smooth surface!) in a hot red.  I washed the whole canvas in a warm, pale yellow, and started working on the background.  I knew I wanted there to be lighter areas at the top, as if some sun might be working it’s way through in the distance, but quite dark and glowy in the foreground.  The big twisting tree trunk is many layers of green, gold, purple (yes, purple), payne’s grey, ultramarine, chrome green ….  Every new wash of yellow, gold, green or blue seemed to bring more depth and glow into the background.

By then, I was scared to work on the jaguar!  I started simply, to get over the fear hump.  Using a light wash of payne’s grey, I worked in some vague shading.  I wanted to keep a light touch, because there’s no strong light source to make strong shadows.  Then I washed on some naples yellow, which pretty much covered the shading altogether.  Naples is a pretty opaque color.  Okay, fine.  Have to do the shading over the yellows.  I used washes of naples, then a mix of chromium oxide green and raw sienna (green and red-brown) for a surprisingly appropriate tawny gold-like tone for the inside of the spots and for shading.  I really liked how it was looking, but hadn’t gotten any “black” on it, yet.  That’s a no-turning-back point, and I’m usually a bit timid with it to begin with.  But what’s a jaguar without spots??  So, bravely, I mixed a deep velvety dark from payne’s grey and thalo blue, and dove in, outlining the eyes, and defining the nose and mouth.  From there, it became fun to do the spots.  Jaguar spots are beautiful rosettes, each unique.  They work together to create a pattern similar to the diamonds on a snake, fitting together like a loose puzzle.   Stretching and compressing them to define the stretch and compression in the jaguar was really fun.  Exciting to see it becoming so graphic, with the black on the light gold, set in the jewel-like greens.  Once the “blacks” were in, I went back in with some more of my green-brown to shape a little more, then with some cadmium yellow medium (a sunny golden yellow), which really ramped up the fiery fur.  A few touches of white-white around the eye, ears and the paw playing with the tail, and that was that.

Being me, I would love to change a thing or two, but time constraints had their say.  I really wanted to add a vine, looping from just left of top center down across the right end of the jaguar and tree.  I think that would have added a lot of depth.  Maybe I’ll mess with it in photoshop to see if I was right.

When I have time!

Hope you enjoyed my digression from the Portrait Marathon.  I sure didn’t mean for the PM to run on this long!  I guess that’s what “marathon” means, though, huh?  But don’t worry, Sara!  I haven’t abandoned you!  😉