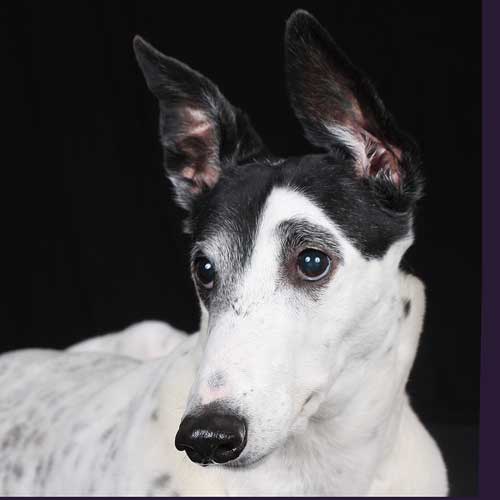 
Skyy was a member of Eliza’s family until this last summer, when an illness took her.  Eliza sent me a long, wonderful letter about Skyy, describing a dog’s dog, who was a study in contradictions, like her own black and white face.  She could be a stuffy killer or a gentle charmer of toddlers, submissive with most dogs, but a bossy gal with her littermate Malibu who also joined the family.  Their bond was special, and they were near each other their whole lives, even racing in the same kennels.  Malibu rescued Skyy from depression when he came home with them.  She must have missed him! 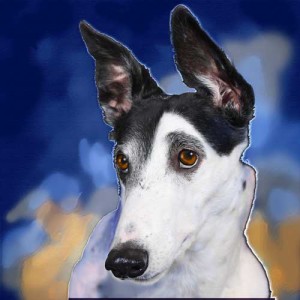 As you can see, the photo is already art.  I did another portrait for Eliza in the last marathon of their dog Bailey, which she asked me to use as a model for how to approach Skyy’s portrait.  So off to Photoshop to mess around.  Alright, it’s not great art.  Yet!  I’ve moved the gaze of the eyes, but I’m not convinced it’s an improvement.  I’ll play that by ear.


I used a dark blue-violet pastel to transfer the drawing to the canvas, which worked alright.  A lot of detail gets lost in the rough texture of the canvas.  I went over critical areas with a blue colored pencil.  That might have been a mistake.  I then brushed over the drawing with acrylic polymer, which is formulated to mix with paints or to use as an undercoat to keep whatever’s underneath from leaking into the upper layers.  Unfortunately *sigh* it smeared like crazy, and either it or the colored pencil made the canvas sort of resistant to the paint, making it bead up.  Argh.  I tried to overcome it, by just working it over with the brush and paint.  Hopefully, it will be fine.  I could still start over.  This is where I am at the moment.

Ack, right?  She looks like a great dane, who has sat on a campfire and isn’t too happy about it.  I cut right to laying some color, instead of my typical underpainting method.  We’ll see.  It’s amazing what happens when you just keep working on it!